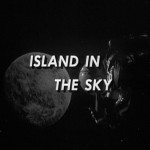 Both the parajets Professor Robinson uses to survey the planet and some of the rockets on the Jupiter 2 fail, leading to crash landings. Suspicions fall on Dr. Smith.

** This summary contains spoilers, so if you haven't watched it, scroll down to the bottom of the page and watch Island In The Sky online at Hulu. **

Last week, the Robinsons were about to land on a mysterious planet. The Professor had planned to send the Robot down to check out the conditions on the planet, but the Robot is far too valuable to Smith. He needs him as protection and as a bargaining chip in his bid to take over the ship and get back to Earth. Smith makes sure the Robot won't respond to John's orders.

When John asks if the Robot is ready, Smith explains that the Robot is very sick, completely undependable. John thinks the Robot looks ok, but when he gives an order, it isn't obeyed. So, John decides someone needs to go down and check out the planet. Don volunteers, but John nixes that idea, saying that since he's the pilot, he needs to stay with the ship. Maureen volunteers their “environmental control expert”, Dr. Smith. Smith agrees he'd be the perfect choice, except that he suffers from acute batophobia (which is the fear of tall things. Being a psychiatrist, Smith should know that the correct term is “acrophobia”, fear of heights. Clearly, writer error here).

So, John suits up and puts on the parajets (a completely infeasible, though interesting solution for getting down to the planet). Don talks John through his trip down to the planet, advising him of his speed, altitude, and other concerns.

As Smith is playing chess with the Robot, he remarks that “they even programmed you with Shakespeare”, seeming to contradict statements from The Derelict pointing to Smith as the creator and programmer of the Robot. Just one of the show's myriad of inconsistencies. I subscribe to the theory that Smith did indeed create the Robot and was responsible for the majority of his programming, but that others were also involved (it IS a complex machine) and that is what he's referencing here. The Robot quotes Samuel Butler, “Look before you ere you leap, for as you sow, ye are like to reap.” Seeing the type of character Smith is at this point, it's a very pointed statement. He wonders if some form of morality was accidentally programmed into the Robot.

Don warns John to get ready to fire parajets. Smith, knowing what's about to happen, then orders the Robot to check on his well being every hour on the hour. Meanwhile, Will comes down to kibitz with Smith as the drama with John's descent to the planet unfolds. Don orders John to fire parajets, but John refuses, arguing that he wants a closer look at the planet before he does so. Don convinces him to fire parajets. John complies, but the jets aren't working because they have no fuel. Don tells him to use his auxiliary fuel. John says he can't and tumbles out of control toward the planet.

Smith rises and tells the Robot that it's time to offer his condolences to the widow. On the upper deck, Smith tells Will he must learn to take his losses like a man. Smith suggests that with the Robot going berserk and with the meteor storm, the parajets may have been damaged. Don argues that he checked them out himself. Penny mentions that she saw Smith look at them too. Smith suggests that instead of casting suspicions on him, they should be more concerned about John. Don prepares to land the Jupiter 2 and search for John.

Smith uses the loss of the Professor to open discussions on going back to Earth. Don ignores him when he demands their actions be put to a vote. When Don and Maureen vote no on going back to Earth, Smith introduces his “proxy”, the Robot, and demonstrates his “voting strength” by having the Robot crush one of the helmets. “As much as I detest violence, it can be done just as easily with your head inside.” Smith orders Don to fire all rockets and head back to Earth.

Don seems to acquiesce and says there's nothing he can do. While Smith promises Maureen that he'll be the first to sponsor a rescue mission to retrieve the Professor, Don sends the ship out of control so he can catch Smith unaware and get him in a headlock. Don orders Smith to send the Robot back to his compartment on threat of death. Smith grudgingly complies. Don stuffs Smith into the freezing tube while Smith's protests, trying to warn him about the rockets.

Soon enough, Don and Maureen realize what Smith was trying to tell them, he'd sabotaged the landing rockets, too. Maureen and the kids strap in below, while Don rides out their crash landing in one of the freezing tubes.

Then comes one of the best special effects scenes of the entire series, the Jupiter 2 flying out of control through the Trona Towers. Everyone survives the crash and the others go above deck to release Don from the tube.

They discuss going out to look for John, but Don isn't willing to go out without having the atmosphere checked out first. Since the Robot only obeys Dr. Smith, Don is indecisive. Will then tells him that he was able to impersonate Smith to get the Robot to obey. Don tells Will to order the Robot to make an environmental estimate, which he does.

The Robot reports that the environment can sustain human life. They assemble the chariot and set out in search of John. Smith is left behind in the freezing tube. They pick up something on the chariot's scanner and head to check it out, hopeful that it's John. Don leaves the chariot to check it out. It's not John. It's an apelike creature that will come to be known as the Bloop, for the noises it makes. Ignoring all his training, Don picks it up, because, you know, it couldn't possibly be dangerous or something. The camera pans to show John nearby in a pit.

Penny asks if she can have it, but Maureen refuses. Seeing her daughter heartbroken, she says she can have it and asks Don to get it for her. She names the bloop “Debbie”. Maureen calls to John through the chariot radio. As John reaches for the radio to respond, it explodes, and John is surrounded by electrical arcs. Another blip is seen on the scanner and Don goes back out to check.

Don finds John in the pit and radios Maureen to send the Robot out with rope. Will gives the Robot the rope, but he drops it and goes back to check on Dr. Smith. Judy picks up the rope and brings it to Don. Don lowers the rope and John climbs up the cliff. They have a heartwarming reunion and John explains what happened on his descent. Don tells him of the trouble with their rockets and they come to the realization that Smith sabotaged them both. Don tells John that they won't have to worry about Smith because he's in the “deep, deep freeze”.

Meanwhile, the Robot defrosts Smith and revives him. The Robot reports that the others are alive. Smith decides that he and the Robot will head back to Earth.

The chariot runs into an electrical tumbleweed that sucks the chariot's energy dry. The Robinsons have to head back to the ship on foot.

When Smith finds that the Robot doesn't know how to fly the ship and that the Robot will defend himself with a high electrical charge from Smith's threats, Smith has to change his plans. He'll have to learn how to pilot the ship from Major West. The others will have to be “liquidated” and Smith plans to have them look like accidents. He laments having to kill Will. He decides he'll have to convince the others he's had a “sudden reformation”, Saint Zachary I, when he sees the Professor is still alive.

Will tries to convince his dad he can fix the chariot, but John tells him no, for his own safety.

When they enter the ship, Smith explains he got out because of a leak in the freezing element, but the experience changed him. He had a moment of weakness in wanting to go back to Earth, but now he's willing to cooperate. Don and John are skeptical, of course, but Smith reminds them that he could have had the Robot kill them. He offers to help by having the Robot check out the environmental conditions at night. John agrees, though Don remains skeptical. The Robot leaves the ship.

John takes a moment to document in his journal that they'd all arrived safely on the planet and felt they were akin to the early pioneers in American history.

At dinner, they find Will is missing and Penny mentions he told her he had an idea on how to fix the chariot. Smith voices concern about Will being outside at the same time as the Robot. John is suspicious and asks why that's a problem. Smith realizes the Professor is suspicious and lies that the Robot is likely to find Will and bring him back. The Robot does find will and goes after him. What happens? You'll have to find out next week.

Watch Lost In Space Island In The Sky Online

Island In The Sky (Lost in Space)

The family crash-lands on an unknown planet in an attempt to rescue Professor Robinson. Maureen and the others use the chariot to man the search, only to face more havoc from Dr. Smith's diabolical schemes.