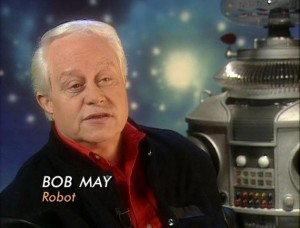 Born to Marty May and June Johnson (daughter of comedian Chic Johnson), Bob grew up in show biz, starting at the tender age of 2. He became a singer and dancer and can be seen in some of the early Elvis Presley movies and a few Jerry Lewis films.

Bob married Judith D. Wells on February 18, 1961 and has a son, Martin, and daughter, Deborah.

When Bob went to see Irwin Allen about playing the role of the Robot in Lost In Space, Allen reportedly told him “If you can fit in the suit, you've got the job”.

Many of his Lost In Space co-workers report that Bob was very comfortable in the Robot suit and often spent breaks inside of it reading and smoking.