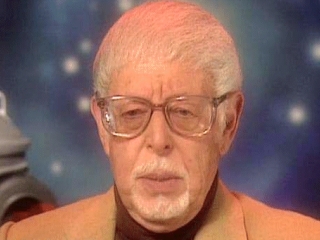 Dick Tufeld was born to a Russian immigrant father and a Canadian immigrant mother in Los Angeles, Ca. He grew up in Pasadena and attended the Northwestern University School of Communication. After college, he worked as an engineer at radio station KLAC in Los Angeles.

Dick's career started in radio as an announcer for several shows including The Amazing Mr. Malone, Falstaff's Fables, and Space Patrol. In 1955, he moved on to television where he anchored a 15 minute newscast on KABC-TV in Los Angeles. He also announced several Disney shows, including Zorro starring Guy Williams.

Tufeld was the narrator of some of Irwin Allen's shows, such as The Time Tunnel and Voyage to the Bottom of the Sea. He is best known, however, for his work as the voice of the B-9 Robot in Lost In Space.