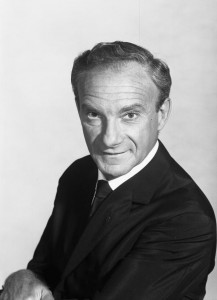 Jonathan Harris was born on November 6, 1914 to poor Russian immigrant parents, Sam and Jennie Charasuchin. He was the second of their three children. He had two sisters, older sister Ida and younger sister Rosalie.

At the age of 12, Jonathan Harris worked as a box boy in a pharmacy. Jonathan's father, Sam, encouraged him to listen to opera and often took him to the Yiddish Theater. His exposure to theater and movies led him to drop his Bronx accent and cultivate a quasi-British sounding accent. In 1932, at the age of 17, he legally changed his name from Jonathan Charasuchin to Jonathan Harris without telling his parents. In 1936, he graduated from Fordham University with a B.S. degree in Pharmacology and worked in drugstores for a few years.

Jonathan loved the theater and acting and at the age of 24, he joined the Millpond Playhouse in Long Island, New York. Four years later, in 1942, he won a small role, as a Polish fleyr, in the Broadway play “The Heart of a City”. He was also involved in entertaining WWII troops in the South Pacific.

Jonathan Harris was a popular character actor on television for over 30 years. The roles he is most known for are Dr. Zachary Smith on Lost In Space, Bradford Webster in The Third Man, and Mr. Phillips in The Bill Dana Show. However, he also had memorable guest roles on The Twilight Zone, Bonanza, Get Smart, Sanford and Son, as well as many others.

Much of his later career was spent as a voice actor, providing the voices to many memorable characters such as Lucifer on Battlestar Galactica, Manny in A Bug's Life, Professor Jones on Freakazoid!, and Geri the cleaner on Toy Story 2.

Jonathan Harris died of a blood clot to his heart just three days before his 88th birthday. A memorial for him was held on November 6, 2002 (his birthday).

Shirley Temple's Storybook: The House of the Seven Gables