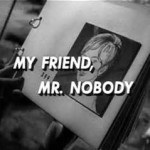 Penny makes friends with a mysterious invisible entity in a cave. It talks to and learns from her. But Dr. Smith draws the wrath of the entity when he destroys the cave in search of riches and, in the process, inadvertently injures Penny.

Watch Lost In Space My Friend, Mr. Nobody Online

My Friend, Mr. Nobody (Lost in Space)

Penny befriends a lonely echo voice she calls “Mr. Nobody.” But when the girl appears to be injured, the being's wrath threatens the Robinsons-until Penny persuades it not to hurt her family.