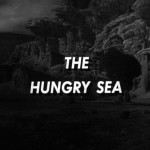 The Robinsons and Major West head south in the Chariot to avoid the incredibly harsh cold. Meanwhile, Smith discovers that the erratic orbit of the planet around its sun will cause a sudden and intense temperature spike and sends the Robot out to warn them.

The Hungry Sea (Lost in Space)

Following a quick escape from an ancient city, the Robinsons must flee the heat of an unknown planet's sun. Heading through storms and earthquakes, they land safely–only to face an unknown entity from outer space.