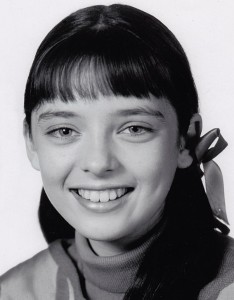 Angela Cartwright was born in England. She grew up in the United States with her family and sister, actress Veronica Cartwright. Angela first gained recognition as Linda Williams on The Danny Thomas Show. In 1965, Angela played the role of Brigitta in The Sound of Music (in which she did her own singing). Soon after, she landed the role that she is most known for, that of Penny in the tv series Lost In Space. While Angela Cartwright has made some film and tv appearances since Lost In Space, she has mostly focused on her artistic endeavors, including photography and writing, as well as on her family life. She is married to Steve Gullion with two children, Rebecca and Jesse.

Did her own singing in The Sound of Music.

In 2007, Angela Cartwright co-authored the books In This House – A Collection of Altered Art Imagery and Collage Techniques and In This Garden: Exploration in Mixed-Media Visual Narrative with artist Sarah Fishburn and authored the book Mixed Emulsions – Altered Art for Photographic Imagery. In 2014, she co-authored Styling the Stars: Lost Treasures from the Twentieth Century Fox Archive, a look at the hairstyling, makeup, and costume of design of Fox Studios from the 1930s to the 1970s, with Tom McLaren. In 2015, Angela co-authored a book of rare photos and stories from behind the scenes of Lost In Space. The book is titled “Lost (and Found) In Space”.

Angela Cartwright on Lost In Space