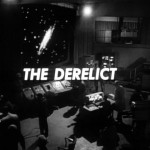 After some harrowing adventures space-walking outside the ship, our intrepid band of space pioneers happens across a seemingly derelict alien space craft. This episode marks the first alien contact in the series with a species that have been come to be known as the bubble creatures.

** This summary contains spoilers, so if you haven't watched it, scroll down to the bottom of the page and watch The Derelict online at Hulu. **

This episode continues where The Reluctant Stowaway left off, with Maureen trying desperately to shoot a line to John who is adrift in space after his line broke while attempting to fix the NGS scanner atop the Jupiter 2.

Maureen manages to get a line to John and pull him back to the ship. Don informs them that there's a comet (a very hot comet, gotta love the “science” of the time) headed their direction and they need to get out of there immediately. Don states they can fix the scanner later. John decides to fix the scanner right then, even though there are just minutes before the scorching comet burns them up. John manages to fix the scanner, but when he attempts to open the hatch, the door is jammed because of the heat from the comet.

Don tries in vain to open the hatch. Will suggests getting the big fire extinguisher from the lower deck to cool the door (which doesn't make much sense since there's a fire extinguisher almost as large hanging right near the hatch.) Don orders Smith to go below to get it and the doctor takes his sweet time, because he's busy programming to Robot to only obey him.

Meanwhile (on October 21st, 1997), we discover that Alpha Control has been unable to regain contact with the Jupiter 2, that sensors indicate there was catastrophic damage to the ship, and that the fate of the ship was caused by sabotage by an agent of a foreign power.

Once Don has the extinguisher in hand, it takes a few minutes for him to open the hatch and haul John and Maureen back inside. During the happy reunion (and quick escape from the comet), Smith disappears below deck to check on the Robot, specifically his claw strength, which he'll use to his advantage later.

Later, when John checks on everyone in their cabins, he discovers Smith tinkering with parts from the Robot. We learn that Smith not only re-programmed the Robot to sabotage the ship, but is apparently the creator and original programmer of the Robot when he proclaims that “every bit, every circuit, every last contact in it is as familiar to me as my own name”. Just as he's about to confine Smith to quarters, Don informs him that they've come across an alien ship. All, but Smith, go to the upper deck to see. As the Jupiter 2 is maneuvering around the incredibly large ship, it gets pulled into the larger ship by some sort of tractor beam. The ship lands in an immensely large hangar which is filled with breathable atmosphere. John intends to take Don and Smith with him to check things out. Smith is unusually agreeable to this, as he thinks the ship belongs to Aeolus 14 Umbra and his rescue and return to Earth is imminent.

Once outside the Jupiter 2, Smith is quite impressed with the technology of the bigger ship and wears a smug grin, expecting his days as a space castaway will soon be over. They find what appears to be a control room. While Don and John try to figure out the alien technology in the control room, Smith delves further into the derelict ship. Don states he hates the thought of Smith wandering off by himself. John replies that Smith can't do any harm here. Oh, really?

Meanwhile, Will has fooled the Robot into thinking Dr. Smith has given him a command to step forward and has slipped out of the Jupiter 2 to explore, in disobedience of his father. He comes across one of the bubble creatures and tries to communicate with it. Shortly after, Smith comes upon the two and is shocked to find that the inhabitants of the ship are not human. Instinctively, he wants to shoot at the creature, but Will convinces him to let him try to communicate.

The women are worried about the menfolk, but Maureen tries to put their minds at ease. She suggests Penny go down and finish her chess game with Will. When she does, she discovers that Will has left the ship.

Smith and Will, while attempting to communicate with the bubble creature, argue over their goals, going to Alpha Centauri or going back to Earth. The alien doesn't answer and, in frustration, Smith zaps him with his laser pistol. That doesn't go over very well and the aliens go on the attack. Everyone rushes back to the ship. John blasts through the hull of the ship and fends off the bubble creatures with a laser rifle as Don readies the ship for escape. The Jupiter 2 lifts off and escapes back into space to continue on with its journey.

John documents the adventure, and man's first encounter with aliens, in his journal, and the fact that they have come across an Earth-like planet. John intends to check the planet out, while Maureen argues that their mission is to settle Alpha Centauri, not explore other planets. Don and John convince her that they need to set down to repair the ship in normal gravity. What happens? Well, we'll have to find out next week!

The Derelict (Lost in Space)

Following a tense effort to rescue John Robinson from deep space, the Jupiter 2 is drawn inside a massive alien spaceship. There, the family confronts a strange race of bubble creatures.