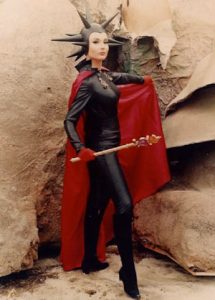 It is with great sadness that I announce that our Noble Niolani has passed away. Despite only being in one episode of Lost In Space, Francine York made a big impact on fans with her guest role in "The Colonists". She portrayed Noble Niolani, leader of a female-centric society looking to colonize other worlds. She was strong, feminine, and I'm sure male fans will agree, she wore that costume well. The chemistry between her and Jonathan was undeniable, they had such a good time acting in this episode.

Francine York Was So Accessible To Her Fans

Francine was very accessible to her fans, entertaining and conversing with many of them on her Facebook page. Fans knew her as a sweet lady who was happy to share glimpses of her life, her opinions, and advice with them. Her passing came as a shock to many, especially because she had not shared that she was battling cancer. But, I think that fit what many of her fans knew about her, not wanting to focus on the negative. Instead, she had a bubbly personality and focused on the positive and lived life to the fullest.

Fans are posting tributes and remembrances on her Facebook page. Her friend Pepper Jay is working on putting together a memorial service for fans to attend. Details will be published when available.

We'll miss her and her vivaciousness. Rest in peace, Noble Niolani.